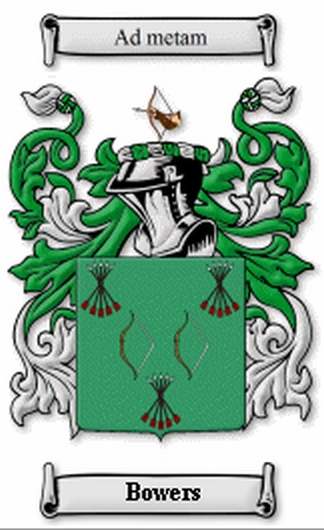 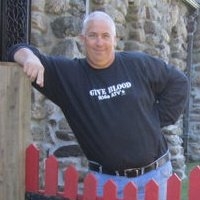 I was brought into this world at 1:23 am,
on a Saturday, at Burbank Hospital in Fitchburg, MA
under the sign of Libra in Oct. of 1958
I was delivered by Dr. Marshall Lamb and nurse Ag Young

I baptized the middle of Oct. at St. Bernard's Church

The headlines when I was born were "United States shows off X-15 Rocket Plane"
other headlines around the world that year were:
War in Algeria lead to crisis in France
Stereo Phonograph Recording Developed
Nikita Krushchev becomes premier of USSR
US President was Dwight T. Eisenhower
Vise President was Richard M. Nixon 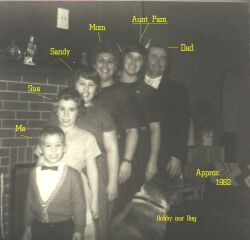 Through the years:   also see resume'

I had worked part time at Shirley Catering from 1972-1983
after graduation i took a road trip to Denver Colorado
and returned home to work as an Electrician's helper at Reardon's Elec. in Leominster MA.
got laid off and went to work for a local wood shop (Kelly's Wood Products)
worked a few small jobs, one for a sign maker, another laying floors
in 1978 I went to work at a metal finishing shop (Fitchburg Metal Finishing / Collier Keyworth) for 5 yrs
in 1983 i started at Fitchburg Gas & Electric (known now as Unitil ), til 2014
I am now retired

I was married in May 1982, to Mary McKenna. We went to Pocono Mt. on our honeymoon
We lived in a 1st floor, 5 room apartment on Garfield St., in Fitchburg, MA.
In Feb. 1985,  had our first child, Jill
In the summer of 1987 we built a home on Appleton Circle in Fitchburg, MA (a Log Home)
In the summer of 1992, we were separated. I was still in the house with my daughter
until the divorce was final in the beginning of 1996 (my daughter lived with me til 2003)

In 2009 i lost someone special to me to Cancer, Donna i dated the year prior & stayed friends..
Since i have dated a few special ladies,  ( Donna, ML, Elle, Cathy, Cindy, Patty, Carol, & Michelle )....
in 2014, I am RETIRED, and have been happily single for a few years..
On April 7, 2014, I had the Gastric Sleeve surgery at U-Mass, and am happily getting healthy & losing weight
In 2018 i got Cochlear implant to my left ear [Advanced Bionics]with hearing aid on right

I am an easy going, relaxed type of guy, not a lot of drama in my life… I am a casual dresser [jeans & T’s] it’s what I am comfortable with & don’t dress up much.. I am a Home Body, and not a Bar person I do have troubles with my hearing & wear aides in both ears… some places are worse to hear than others…
My Spare time I enjoy  photography...  and now VanLife

(Dylan) born in Aug. 96, lives in Hubbardston and is enjoying life, he is a computer wiz... He graduated Monty Tech  in 14 & attended U-Mass Amherst for Computer Science & completed his last semester abroad in Japan.. now seeking employment in Boston area.

I also enjoy Photography, whether it's 35mm, video, or digital.... see my photo page

I have enjoy cooking, Motorcycles, [and use to ATV] in past

I drive a Dodge RAM Promaster 3500..  modified to a Winnebago Travato

I also enjoy camping, which started from tenting, then into a 23 ft. trailer, then a 27 ft. class one RV. back to a 17' Fold out Trailer., now nothing, LOL

In the summer of 1998, we pulled our Trailer close to 4,000 miles, in 3 week. We headed to Niagra Falls,
then to Michigan (where we met an online friend, Helen), from there we went under the Great lakes and up to the Wisconsin Dells. We also visited the "Mall of America". From there we traveled south into Iowa, where we visited another online Friend, (JohnBoy)... After that, a little further south and visited the Precious Moments. From there we traveled back east into Pennsylvania, to visit Hershey, Sesame Place & Crayola Crayon. and then back home....
For now we have been camping just in New England......

To start of the year 2002, we did a CRUISE to the Carribean (Princess)

2004 I started a Garden, Doing stuff around the house, working with the Scouts & doing some Camping
We traveled 1,400 miles through out PA & NY.. See where we went & what we did

2005 we went Camping at Cape Cod for a week and a half..  see pics
also did my 3rd year of volunteering a week at Cub Scout Camp

2006, February we are going on a Disney Cruise on the western Carib.

2008, Bike up to Lake Winnipesaukee